Your source for cool solutions

If a heat sink is placed directly on top of a heat-generating device (chip), a thin layer of air gaps will exist between the two mating surfaces, due to the roughness and imperfection of the  surfaces. The air gaps are thermal barriers to the heat dissipation path. To remove or reduce the air gaps, thermal interface materials (TIM) shall be used between the 2 surfaces. Good interface materials should have high thermal conductivity, good capability to fill up the micro gaps, and good long term stability.

Thermal greases (also known as thermal compounds and thermal pastes) are  made from silicone or hydrocarbon  oils that are mixed with conductive ceramic or metal particles. Thermal greases offer the best overall performance because they can easily  flow  into all voids on the surface and form the thinnest possible thermal joint. But thermal greases are not manufacturing friendly. They are messy and difficult to apply and remove. Excess grease that flows out of joint must be cleaned up to prevent contamination and possible electrical shorts. Grease can be “pumped out” of the interface under thermal cycling because of the relative motion of the mating surfaces under thermal expansion and contraction. Grease joints can dry out with time, resulting in increased thermal resistance. Grease degradation rate is a strong function of operating temperature and number of thermal cycles (Gwinn and Webb, 2002, Viswanath et al., 2000).

Phase change materials (PCM) are solid films at room temperature that  melt or soften when the temperature rises to 40-70°C. PCM’s are composed of a mixture of wax-like binders, fine particles of ceramic fillers, and, optionally, a supporting substrate, such as aluminum foil or a woven glass mesh. When phase change occurs, the liquid-like materials fill the voids on the surfaces and reduce the thermal resistance. When the temperature drops, the materials maintain their shapes and form a solid joint between the two surfaces. The following diagram (from Miksa de Sorgo 2002) compares the performance of phase change materials to thermal greases and dry joints. Although the thermal resistances of PCM’s are slightly higher than thermal greases, the higher viscosity of their binding materials prevent them from leaking to the surroundings, and make them the clean and preferred interface materials in many high performance applications. The disadvantages of PCM’s include the requirement for moderate contact pressure and their reworkability. Both Intel and AMD have reported that some PCM’s create a strong adhesive bond between heat sinks and processors and induce processor damage during heat sink removal (Intel 2001, AMD 2004). 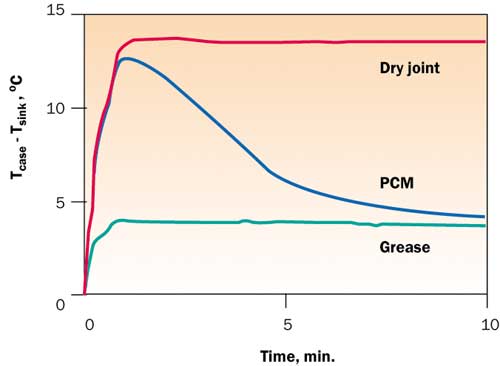 Gap filler pads (also called gap pads and elastomeric pad) are made of thermally conductive silicone elastomers which deform easily under compression force to fill up  air gaps and surface irregularities between heat sinks and components to increase the heat transfer rate. With typical thickness of 0.25-2.0 mm, most gap pads incorporate a woven fiberglass carrier to improve handling and contain inorganic fillers as thermal greases do. They are supplied as die-cut preforms in the precise shape needed for the application. Assembly is therefore very simple. The tradeoff is that high pressures are needed to achieve an adequate interface. Furthermore, because their thermal performance is not as good as thermal greases or phase change materials, their applications are limited to those with modest thermal requirements.

Thermal tapes are also known as “thermally conductive double-sided adhesive tapes”. They are developed not only as a thermal interface material but also a means to eliminate mechanical attachment hardware. For this purpose, their mechanical adhesive properties are far more important than their thermal properties. They must hold the heat sinks in place at high temperature, under thermal cycling, and during shock and vibration.  Their thermal performances, on the other hand, can only match or be slightly better  than a direct contact of heat sinks and components.

Thermal epoxies, gels and solders provide other options to join heat sinks to components. Due to their good wetting properties, the thermal performances of these TIM’s are close to those  of thermal greases. Compared to thermal tapes, they provide more secure (or permanent) joint between the heat sinks and components. However, they are generally hard to use because of the curing or reflow processes, and make rework very difficult (if not impossible).