Your source for cool solutions 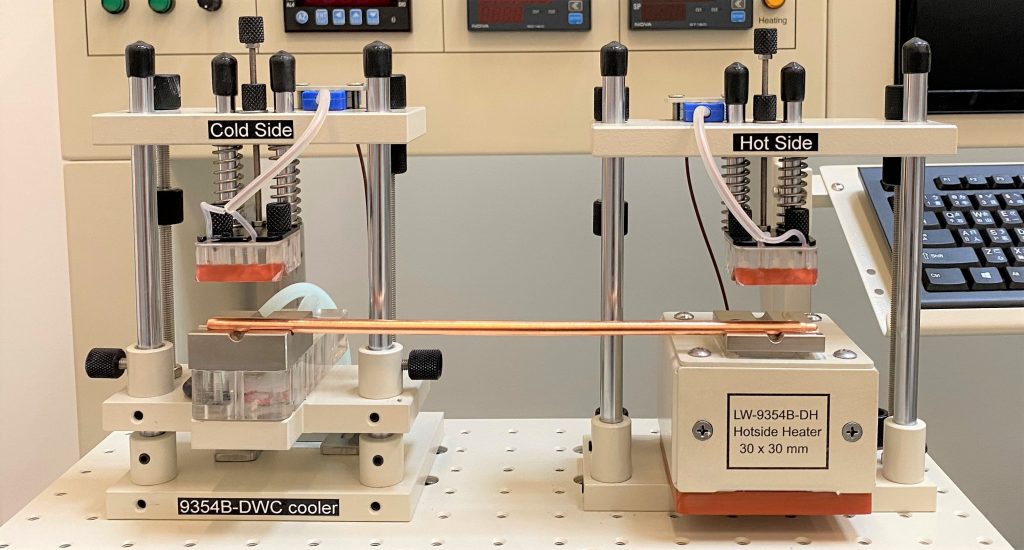 A heat pipe is an extremely efficient thermal conductor. It can transfer large quantities of heat over a long distance essentially at a constant temperature. It is typically a sealed copper or aluminum tube containing a wick structure on its inner surface and a small amount of working fluid at its saturation state. The fluid absorbs heat and vaporizes at hot spots and condenses and releases heat at cool spots. As the process goes on, heat is transferred from the hot spots to the cool spots.

Because a heat pipe has no moving parts, it is a highly reliable device with demonstrated lifespan of over 20 years. The reliability depends on the manufacturing process and the purity of the materials. At MyHeatSinks, all heat pipes are 100% individually tested to ensure functionalities and reliability.

Heat pipes were thoroughly studied by Los Alamos National Laboratory in 1960s. Los Alamos physicist George Grover demonstrated his invention in 1963 being the first to use the term “heat pipe”. Due to the low weight and high heat flux, heat pipes began to gain interests. Beginning with NASA, heat pipes were applied to satellites for thermal equilibrium. From satellites, a wider range of applications can be found using heat pipes such as air conditioning, engine cooling, and electronics cooling.

The performance of a heat pipe is mainly determined by its wick structure, which performs 3 primary functions: First, to allow the backflow of the liquid from the condenser section to the evaporator section; Second, to allow the heat transfer between the inner wall and the fluid; Third, to provide room for the fluid to change phase. We currently provide heat pipes with 3 different types of wick structures – the sintered wick, the micro-groove wick and the compound wick. The sintered wick allows high heat flux and wide working angle and is recommended for most electronic applications. Micro-groove wick offers light weight and low cost, but its working angle is limited and often gravity dependent. Compound wick combines the features of both sintered and micro-groove wicks and is preferable in some applications.

Heat pipes can be filled by partially filling with distilled water (or other type of working fluid) and then heated up until the water boils and displaces the air. The heat pipe is then sealed while hot. The typical water amount is about 0.5 to 1.0g and the typical vacuum pressure is about 0.1 Torr. 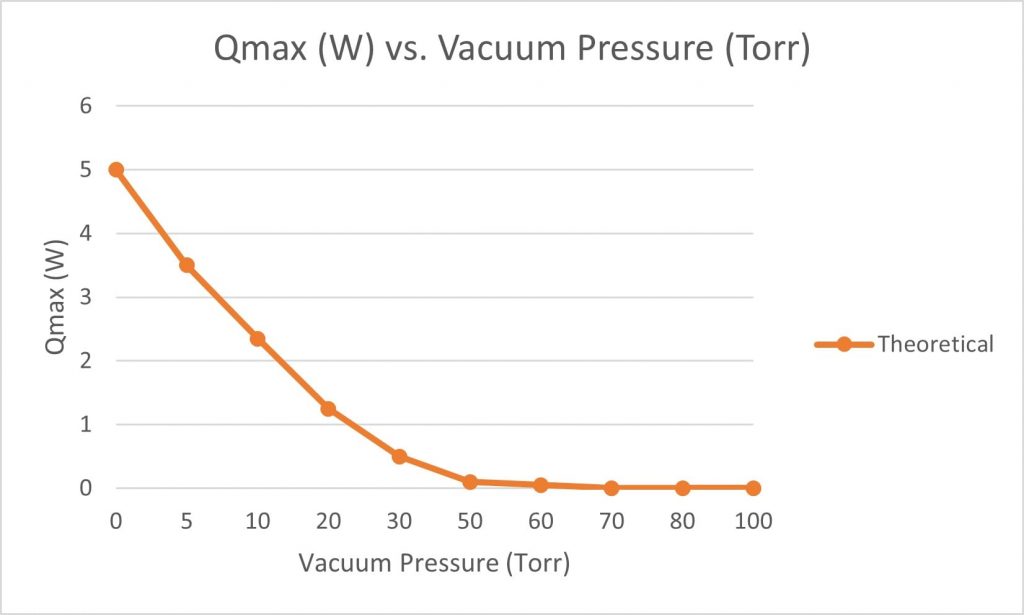 The largest diameter we currently make is 12.7 mm (0.5 inch). The heat pipes have micro-groove wick and are designed for high-power LED applications and solar systems. 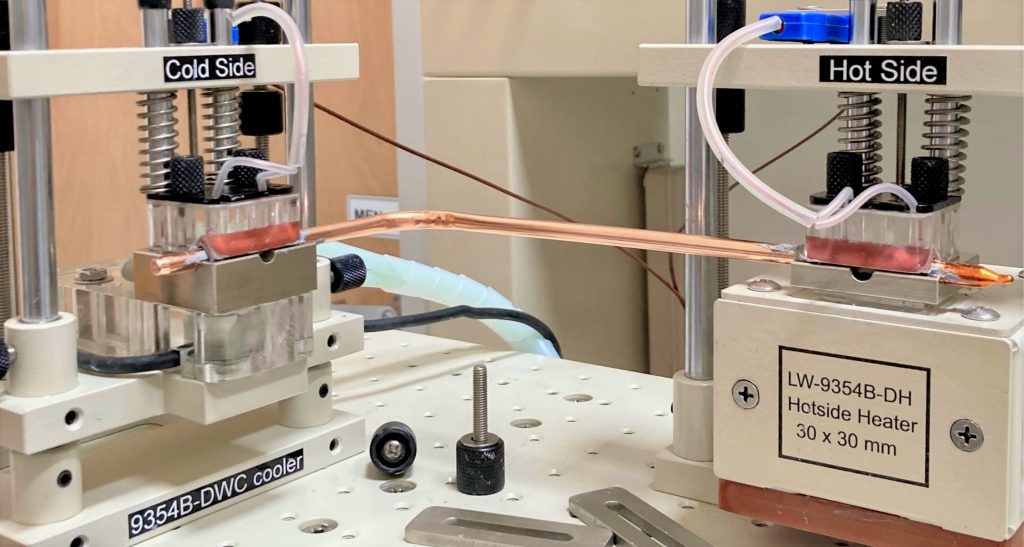 To evaluate the performance of heat pipes, we have a state-of-the-art heat pipe tester provided from Long Win Science and Technology Corporation. It is equipped with a water-cooler circulating system, heating control system, attitude adjustment device, measurement system, data acquisition, and test analysis. With the attitude adjustment device, heat pipes can be tested at different angles and directions to evaluate the performance of heat pipes given different testing conditions. For more info about our tester, please visit our Heat Pipe Tester page.

Place the test object between the heating end and the condensation end.

Input heat from a controllable heat source and remove the heat from the water cooling through the specimen.

With the heat absorbed by the heat pipe (Q), the thermal resistance (R) and equivalent thermal conductivity (K) of the heat pipe can be calculated. 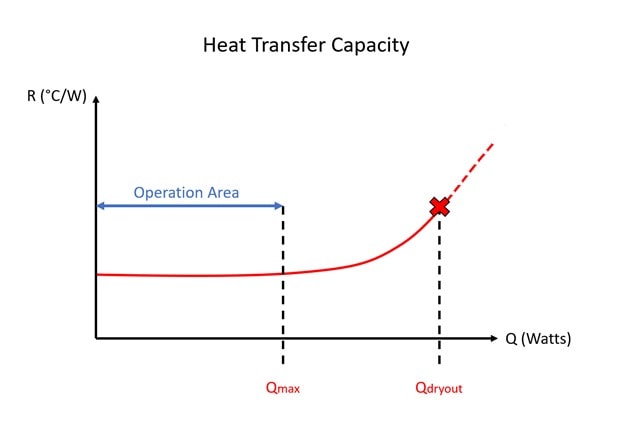 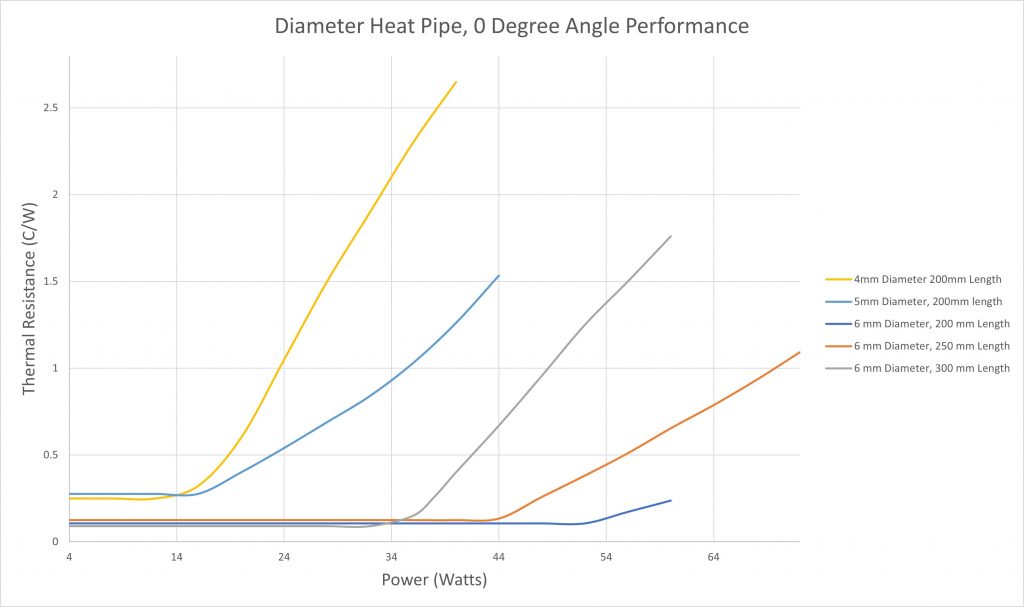 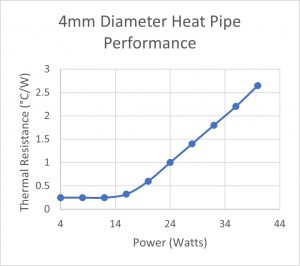 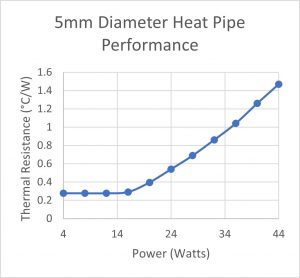 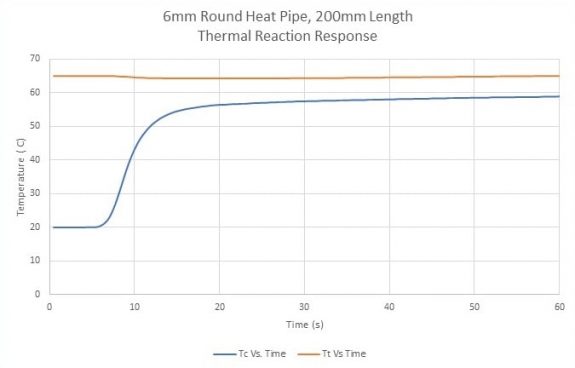 The thermostatic water is set to 65°C The initial temperature of the heat pipe is approximately ~20°C. After about7 seconds, the hot end temperature rises to about ~55°C and approaches steady state.

Heat pipes can transfer large amounts of heat over a long distance at a constant temperature. There is a very low temperature difference across its length. Typically, less than 2°C (compared to larger ΔT on copper or aluminum tubes). Heat pipes also have highly effective thermal conductivity focused along the axis. With low maintenance and long life expectancy, heat pipes are highly reliable with a lifespan of 20 years.

Our heat pipes are in compliance with the European Union Directive 2002/95/EC on the Restriction of the Use of Certain Hazardous Substances in Electrical and Electronic Equipment (RoHS Directive).

High Thermal Conductivity – A heat pipe has much lower thermal resistance and much higher thermal conductivity than any solid conductors such as silver, copper and aluminum, enabling it to transfer heat more efficiently and evenly in several orders. For example, a 6mm diameter heat pipe with sintered wick can transfer up to 120W heat.

Excellent Isothermal Performance – Due to the small pressure drop of saturated vapor from the evaporator section to the condenser section, a heat pipe can maintain almost a constant temperature over its full length.

Reciprocity of Heat Flow Direction – The circulation inside a sintered heat pipe is driven by capillary force, instead of gravity. So either end can be the evaporator section or the condenser section.

Adaptability to Environment – Due to the various wick structures, we can supply heat pipes that are suitable and reliable to meet any environmental challenges.

Surface Treatment – Our heat pipes are treated by an anti-oxidation process. They can also be nickel plated or anodized to increase its weldability or heat radiation capability.